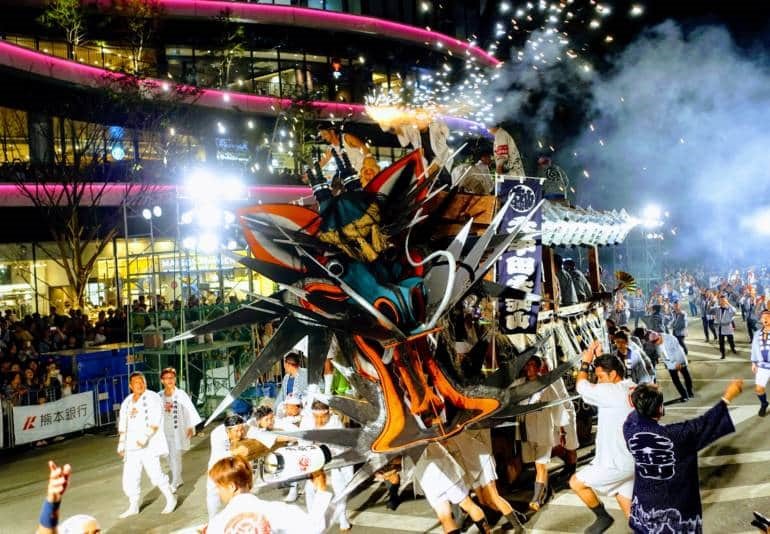 Aside from simply looking amazing, festivals in Japan offer a chance for visitors to get involved. A relaxed atmosphere, high spirits and community activities can be a great way to experience different elements of Japanese culture. If you’re planning ahead for a trip to Kyushu, there are a few opportunities to keep in mind. In Kunisaki, Oita, you can visit the annual fire festival complete with guide, a temple dinner and bus pick ups (to avoid crowded transport). 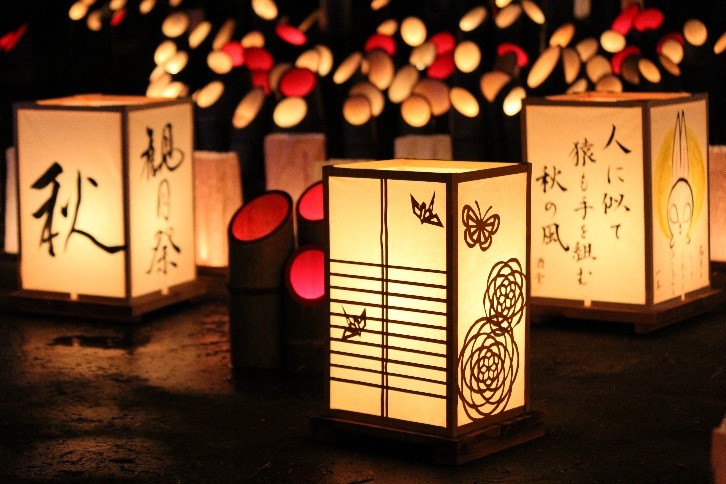 If you are lucky enough to be in Kyushu in October, the Kangetsu-sai Moon Viewing event is an unmissable experience. You can step back in time to participate in this ancient tradition—making your own lantern, enjoying a tea ceremony and more.

Check out the full calendar of events in Kyushu so you can plan your trip with an unusual local twist.

An island packed with unusual festivals and plenty to keep visitors entertained in between, Kyushu is the perfect destination for those looking for a unique adventure in Japan. Combining the cultural highlights of nine prefectures, the festival calendar is packed with a variety of events throughout the year, making it easy for travelers to experience the incredible atmosphere and rare sights of local festivals themselves.

Sightseeing and shopping in Kumamoto

A small city known mainly for local mascot Kumamon, Kumamoto is a friendly spot with a downtown feel. Trams are the best way to get between sights and are part of the experience on their own, with many running for decades. 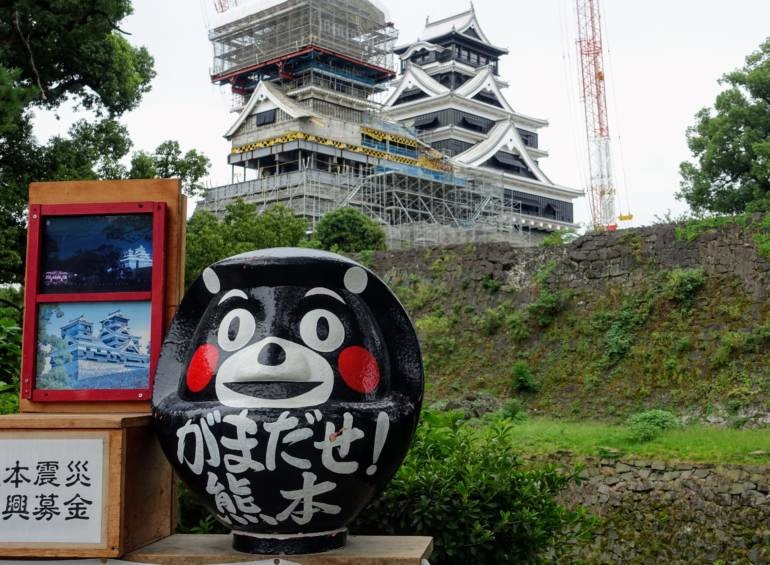 One of the city’s most famous spots is the 17th century castle, which was heavily damaged in the 2016 earthquakes that shook the city. While it once offered one of the most beautiful castle tours of Japan, complete with carefully reconstructed keeps, halls and gates along with beautiful gardens, it is now undergoing serious repairs. With severe structural damage and entire sections lost, it is expected to take 20 years to return the castle to its former glory.

Today, visitors can view the castle from the nearby grounds and donate to the project. Still a landmark for visitors, the castle stands as a symbol of the city’s strength and its perseverance in the face of adversity. 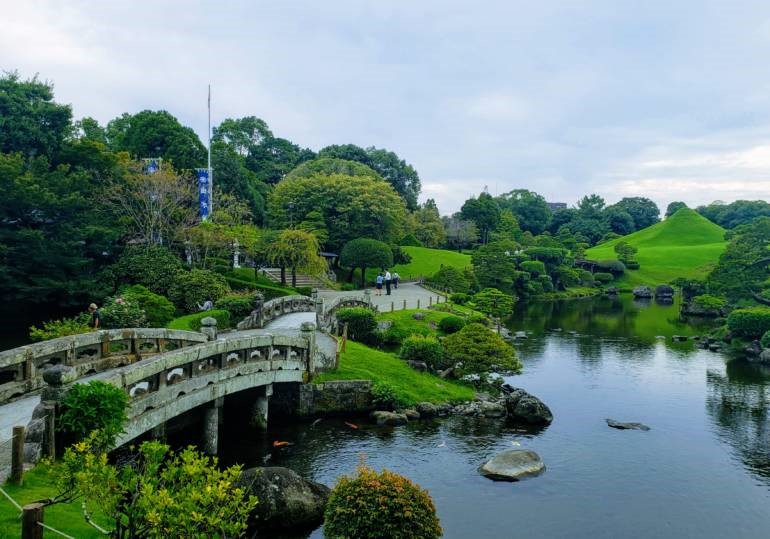 Hop on one of the city’s beloved trams for a stroll through the beautiful Suizenji Garden; a portrait of Japan in miniature. Recreating scenes from the 53 post stations of the Tokaido Road, visitors will spot a grass-covered Mount Fuji, the central Nihonbashi Bridge and Lake Biwa, among other landmarks from Japan.

When Tadatoshi Hosokawa became the first Lord of the Kumamoto Domain in 1632, he built Suizenji Temple beside the castle grounds, shortly followed by the teahouse—forming the beginning of the current gardens.

Perfected and funded by his successive lords, the garden took on its final shape and has remained largely unchanged to this day. Visitors can sip from the sacred waters of longevity flowing fresh from Mount Aso, explore the plum and cherry tree groves and take tea in the ancient teahouse—not to mention admire the statues, engraved haiku and temple buildings dotted throughout the grounds. 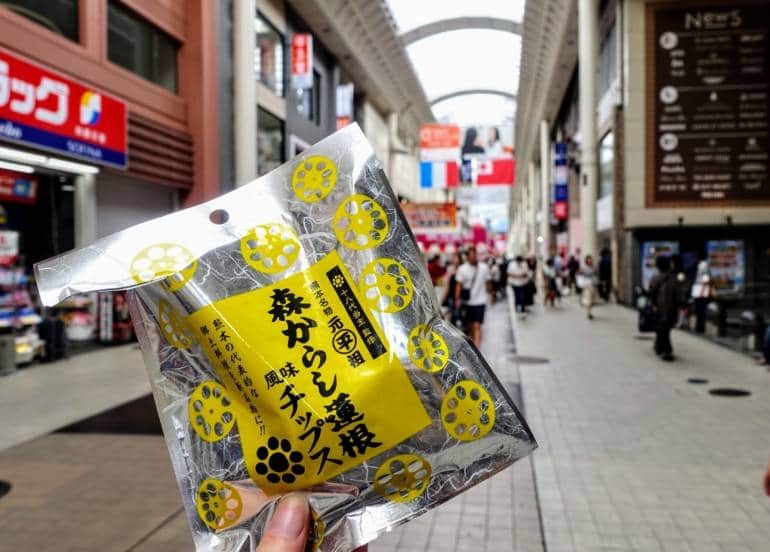 Two main shopping arcades can be found in Kumamoto, packed full of shops, stalls, street food and cafes. Shimotori is the longest in the city at over 500 m and has more bars and restaurants than the shorter Kamitori. Packed with plenty of modern shops and older ones too, it had a bustling feel with bright lights and remains crowded at night as the bars and eateries draw in the crowds.

At 360 m long, Kamitori is unusually European as the roof was modeled on the Musée d’Orsay in Paris, with huge skylights. Considered more laid back than Shimotori, this arcade has a mix of old and new shops with side streets offering bars and restaurants in the evening. 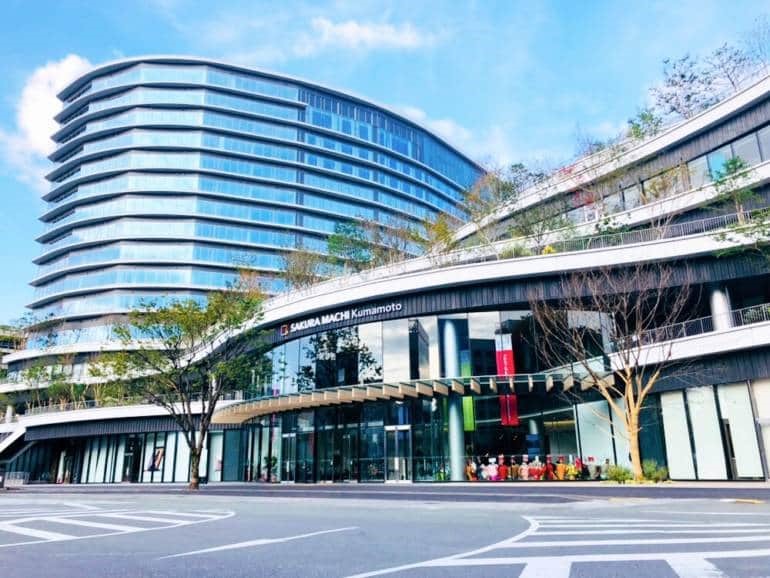 Newly opened in September 2019, this mega-center is the new heart of Kumamoto. Home to the bus terminal, a shopping mall, hotel, apartments and a giant Kumamon who presides over the city, Sakura Machi impressive to say the least. Since Kyushu relies heavily on buses over trains, this transport hub is somewhere you’re likely to visit during you’re stay, with the rooftop garden and food courts making it hard to leave.

Housed in a Kuma-like design, the building is a short walk from the castle and offers views of the repair work in progress from its many balconies as well as the roof. There are 149 shops to browse, covering pretty much everything, from Daiso to a specialist anime store, but one thing is missing: a book shop. Keen to encourage visitors to head out into the city, it left some things missing, tactically choosing books as a guaranteed gateway to the city. 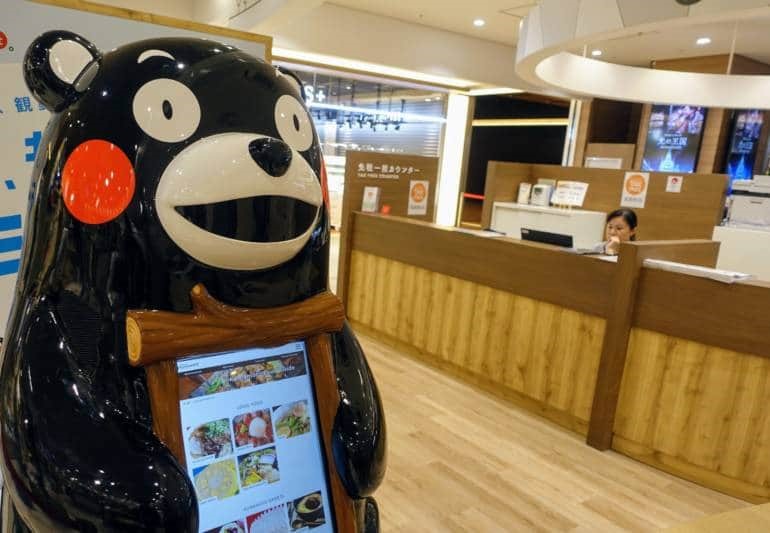 The restaurant floors and food courts are a mix of local restaurants and national chains, while the souvenir shops come second to none. Be sure to head to the tourist information center on the second floor—all staff speak a minimum of four languages and one member walks the building with a tablet offering support in over 40 languages. 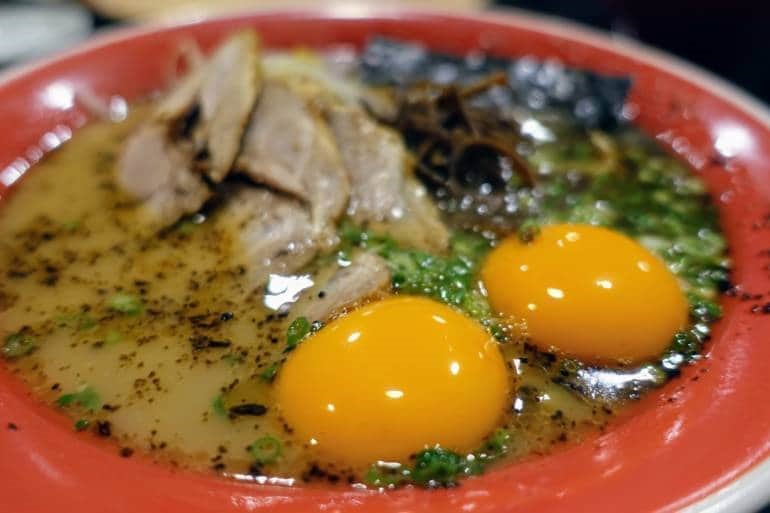 From ramen to fresh fruit, Kumamoto is a foodie haven, with plenty of unusual local specialties to try. In Japan, the first one that springs to mind isn’t quite so popular around the world—and that’s horse meat. Known as basashi, it is served raw or cured and is often a popular souvenir. If that’s not quite up your alley, don’t worry—there’s plenty of other treats to try. The local ramen, pictured above, features blackened garlic and raw egg yolks, perfect when mixed in with the thick tonkotsu broth (best done in your soup spoon it turns out). For savory fans, it doesn’t get much more savory than the mustard-covered lotus root known as karashi renkon. Yellow, strong and weirdly addictive, it’s worth a try, even if it is only the chips! 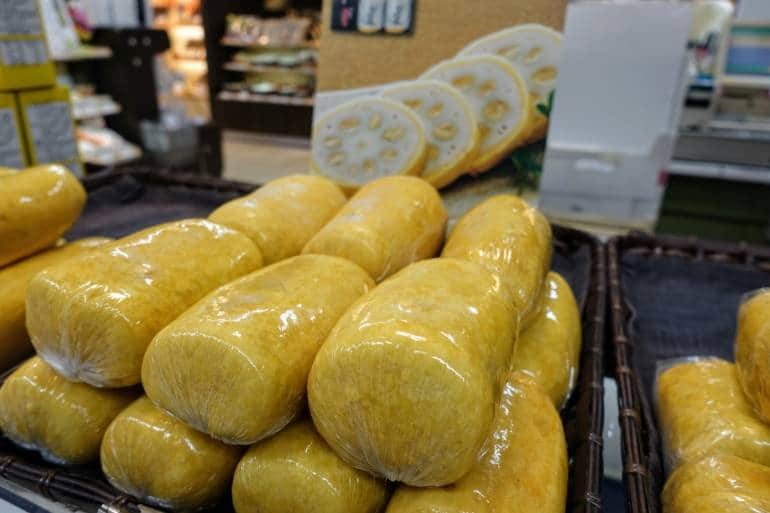 For something a little lighter, taipien is a fusion of local Kumamoto and Chinese flavors. A busy trade port in Japan, Kumamoto has adopted the dish over the centuries along with other international flavors. The mild soup contains vermicelli noodles made from bean starch cooked with cabbage, shrimp, a battered boiled egg and squid, among other ingredients. Found in the Kamitori shopping arcade, the local’s head to Kourantei Chinese restaurant when craving this dish.